Over the summer, ACE visited Taking Action for Animals (TAFA) and the National Animal Rights Conference (AR2014). We took advantage of the large numbers of animal advocates we met at these conferences to do a little highly unscientific research on the kind of people who might be reading our materials. We hoped to learn what kinds of information and arguments would be most helpful to the people who are already interested in what we have to say, but who also have their own opinions about what makes an animal advocacy group effective. We originally planned only to use the results of this survey internally, but decided also to publish some key results in hopes that they might be useful to others in similar positions.

At each conference, ACE had a table with informational materials. Staff at the table had a primary goal of reaching the public with our literature and answering their questions about ACE as an organization. In the course of these interactions, staff looked for opportunities to encourage visitors to take a short survey on a small tablet at the table. This meant that our sample was far from representative of the general public or even of attendees of the conferences: several filters were in place before anyone took the survey.

We think our sample might be representative of people in the animal advocacy community who are likely to take ACE’s recommendations as a strong consideration in deciding where to donate or how to volunteer their time, but we don’t think they’re representative of a larger group, or even of the people who took our literature at these events (of whom many did not stop to talk to us). The responses that would be obtained by conducting the same survey at a different group’s table might be completely different.

1. They already know about the incredible need for farm animal advocacy.

We asked “Which animals do you feel need the most help?” Respondents were able to select more than one answer, and responses were very similar between the samples from the two conferences. Here are the answers, along with the percentage who selected each one: 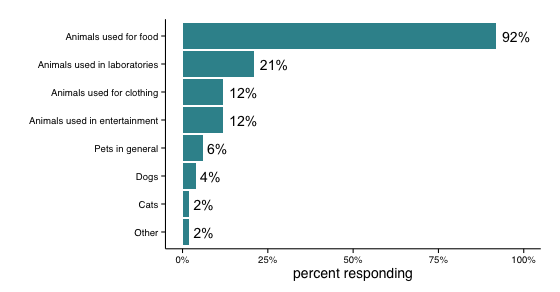 Many of the people interested in our work believe that farmed animals are among the animals that need the most help. We agree! Seeing this broad agreement means we’ll keep talking about farmed animals, of course, but while we could work on demonstrating just how much help they need, instead we’ll focus our energy on learning how they can best be helped and spreading the word about the most effective tactics we find.

2. They’re most interested in supporting groups active in the United States.

We asked “Which of these animals do you feel most motivated to help?” Respondents were able to select more than one answer, and responses were very similar between the samples from the two conferences. Here are the answers, along with the percentage who selected each one: 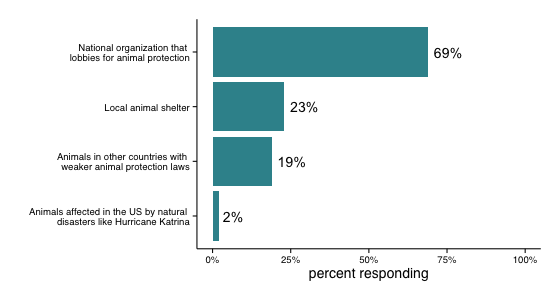 Most of the people we asked were strongly motivated to support national organizations lobbying for animal protection, like the groups we recommend currently. (We attended conferences in the United States, and our current top recommendations are national farm animal advocacy groups in the US. We expect similar audiences in other parts of the world are also most interested in supporting organizations working in their own countries, but we also think that we have and will continue to have the most reach in the US.)

In the future (starting with our next recommendation update on December 1st), we plan to consider organizations working primarily or exclusively outside the US, alongside US organizations, for our top recommendations. If we recommend a foreign group (or groups), we’ll want to spend extra effort explaining how this group became our top choice, so that donors who originally intended to donate to a US group can see why our recommended group works in other countries.

3. Impact is their top consideration in deciding which groups to support.

We asked respondents who indicated that they donated to animal charities, “Regarding donations, what is the most valuable information that you use when deciding which animal charities to support?” Respondents were able to select more than one answer, and responses were very similar between the samples from the two conferences. Here are the answers, along with the percentage who selected each one: 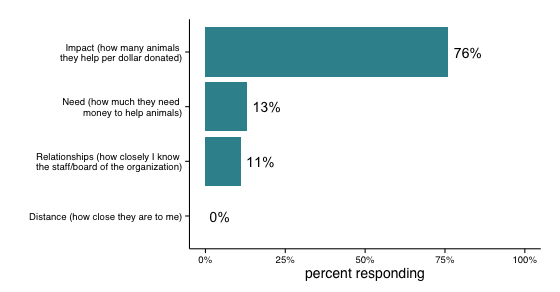 We also asked how respondents chose organizations to work or volunteer with. Impact was still the most popular choice, but unsurprisingly the other factors were all more important than in the choice about where to donate.

These responses, particularly regarding donations, are quite different from what has been found in larger-scale studies of a more general audience, and may have been influenced by their contact with us. We’ll be writing a post on that soon!

We asked, “What do you wish you knew about the animal charities you donate to?” Respondents were able to select more than one answer, and responses were similar between the samples from the two conferences. Here are the answers, along with the percentage who selected each one: 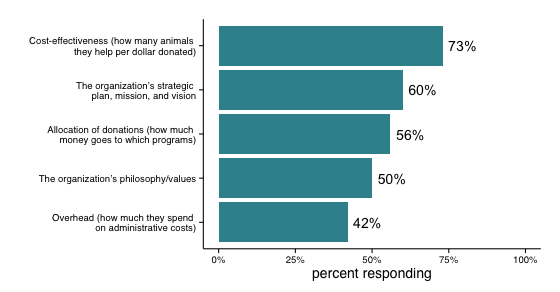 5. If they’re at the Animal Rights Conference, they’re more likely to be vegan and less likely to buy “humanely-raised” products.

We asked “What ways do you help animals?” Respondents were encouraged to select more than one answer. This was the only question, apart from demographics, where there was a clear difference between the responses we received at TAFA and at AR2014. Here are the answers, along with the percentage who selected each one: 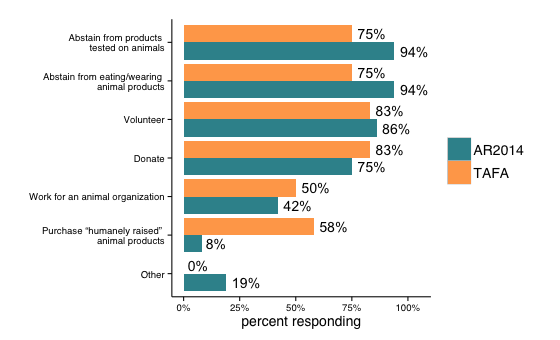