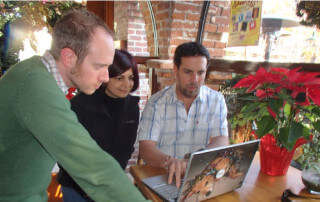 It won’t be long before nearly everyone in the world has a smartphone. The $600 phone you bought a few years ago is less powerful than a $40 model today. The average laptop has an unimaginable amount of computing power. But even more impressive than what devices can do is how adept the average person is at using them. Which is to say that the advances in technology are not just in the devices, but in us, too. For those of us committed to helping animals, smartphones and tablets have become powerful tools for spreading awareness, inviting action, and engendering change.

We have left the information age and are now in the interaction age. Increasingly, apps are the primary interface between people and organizations. Fewer people are going to banks. More people are using banking apps. When a customer uses a banking app, she expects more than just information from the app. She expects the app to enable her to make deposits, transfer funds, and pay bills – all the things she used to do at a bank. She expects this not only in banking, but in insurance, investing, shopping, airlines…even in buying a house. My wife and I recently bought our first house and we spent more time using the Zillow app than we did interacting with anyone in person. Soon, visiting a doctor will be as much of an app interaction as a human one.

One effect of this revolution is that people have come to expect more. They presume there is a more advanced way of doing things and get frustrated when the process is slow and inefficient. People expect apps to provide them with the information they need, the interactions they crave, and the ability to take action.

Many animal groups have become skilled at disseminating information online. They have not, however, been great at harnessing the energy of people and the power of their devices to spur action. Of course, this capability is fairly new and it takes time to adjust. But the early adopter phase is over. Everything I’ve described is mainstream. And though there are a few notable exceptions, as a movement, we are behind the times.

Take animal testing, for example. The old approach was to ask people to avoid some of the big brands in animal testing. And to provide shoppers with a list that dedicated advocates could carry with them. The new way is to create an app that lets users scan product barcodes for a quick yes or no. Is the product not in the database? Apps make it easy for the user to add it. Thank you CCIC’s Leaping Bunny Program and Symbiotic Software for creating an app that does this. There is hardly any cost to Symbiotic to run this app and no cost to the user.

The cost per action through an app can be dramatically cheaper than traditional offline mechanisms. For example, consider The Humane Eating Project – an app we developed at my organization, America for Animals (AFA). This app cost AFA $50 to publish in the App Store (iOS) and $25 to publish in the Play Store (Android). The monthly costs to run the app are $0 until we reach about 400,000 users. Then it will skyrocket to… $.01 per user per year. Every time someone uses our app to find vegan, vegetarian, or humanely-raised food, it costs us nearly $0. Every time somebody shares our app with friends and those friends download it, we pay $0. 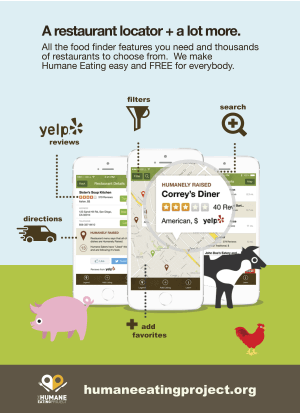 Does the idea of developing an app seem too difficult? Developing an app is not easy, but the scalability potential suggests the animal protection movement should be doing more of it. Here are some tips to getting started:

The Humane Eating Project wouldn’t be possible without the help of VegGuide.org, which maintains an open source database of vegan and vegetarian restaurants. At America for Animals, we have a product in development named Hive. Hive is a social network for helping animals. It connects people to the organizations, events, and advocates in their communities. Hive will be much more effective as a result of World Animal Net generously sharing their database of global animal welfare organizations with us. That collaboration makes it much more likely that Hive users will discover organizations they are excited to support.

As a movement, the data we develop and the technology we create is in the service of the animals who need our help. Working in silos while resisting innovations reduces our ability to improve their lives. Collaborating, innovating, and sharing will bring to life new solutions and the kind of modern, effective movement we need to accomplish our mission.