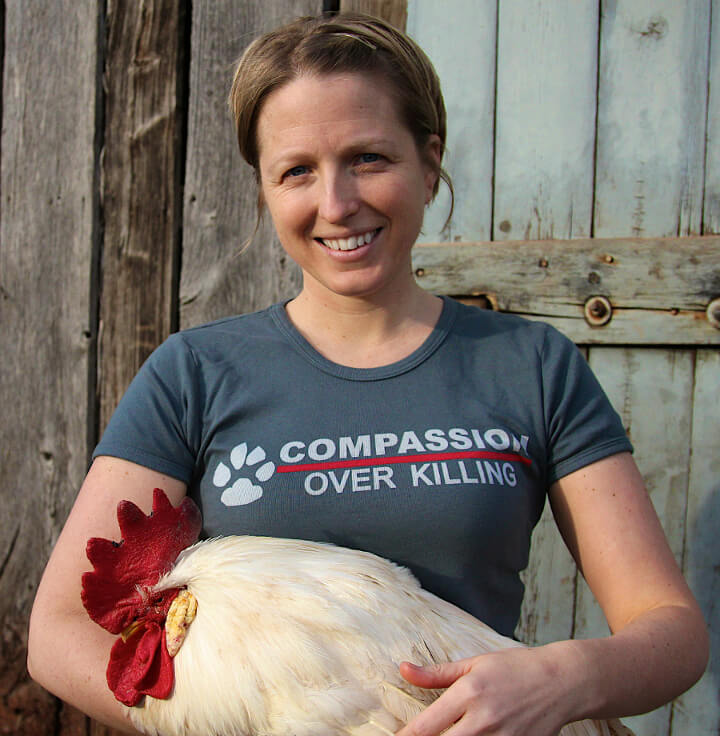 The following is a summary of a conversation that took place on March 21, 2014 as part of our medium depth investigation of Compassion Over Killing. Erica Meier spoke with Allison Smith, ACE’s Director of Research.

As part of their 1-year plan, COK plans to focus on undercover investigations and legal advocacy. Erica thinks it’s very important to focus on getting footage right now, especially with the passing of recent ag-gag laws and the threat for expansion of these laws. Running more investigations has the added benefit of showing why video exposés showing cruelty and food safety issues confirm why consumers deserve more transparency, not less.

COK initially put more focus on birds in their history, but have moved away from that. They now intend on putting more focus on hens and chickens (both egg-laying and broiler). They originally started with chickens because they were denied most legal protection, are raised and killed in the largest numbers compared to other factory-farmed animals, and are forced to endure immense suffering.

COK plans on continuing to grow. They are moving in the direction of legal advocacy and proactive lawsuits challenging misleading food labeling and marketing. They plan to continue expanding undercover investigations. They want to improve on their pro-veg outreach efforts, marketing, and messaging. Learning from Nick Cooney’s work, they want to implement better evaluation for what is most effective and how to measure data. They still have a lot to learn in this area, but see it as an area for significant growth with COK.

Raising additional money would allow COK to put more energy into the programs they focus on. More funding would mean expanding COK’s investigation program and increasing the impact of each video expose, and conducting more legal research re: investigations (such as whether or not there are federal violations or marketing efforts that they should be challenging).

Some donations are restricted, and that does cause some limitations. If COK received a substantial unrestricted gift, they would use it to expand their undercover investigation program, create strategic marketing/messaging toward pro-veg outreach, work with pro-veg commercials, create more professional ads, and measure the results of specific areas.

They don’t anticipate the funding situation to be different this coming year, though they hope it continues to grow. COK does not have a very established development program or full-time fundraiser, and they do see value in laying out a better plan for this in the future. It’s hard to predict how funding will look. Most likely, successful campaigns will lead to more support throughout the year, and those are foremost in their mind right now.

If COK received an extra $10K, $50K, or $100K, they would apply some of the extra money to their pro-veg commercial campaign. They think they could scale up that program, and that they’ve had success with it in the past. However, they also might use some of the funds to improve the quality of the commercials, as everything thus far has been developed in-house. Their current videos are good but are becoming a little outdated, and thus may not catch attention as well. They would still use Youtube or Hulu for these.

They might hire additional staff to work on campaigns to push corporations to remove animal products from their product lines, similar to COK’s success with Boca to completely remove eggs from their line. This would significantly reduce the number of animals used for food, including thousands of laying hens. No one is working in this area full-time right now; they no longer have the focused campaigns of the past, and she would like to bring some of these back.

COK is still determining the best way to do this. They get plenty of anecdotal responses, but they’re not sure how to look at the numbers yet. Once they have more data and a better sense of what they’re looking for, they hope to explore this in more detail.

An example of something they’ve learned but need to look closer at in the future is the results from pro-veg commercials on MTV and Comedy Central. They don’t know of a direct connection, but they did see an increase in website traffic whenever they aired those ads. Now, COK is switching to more of an online focus, as people are watching more online in general, and you can track everything from the ads to the site, including requests for materials.

The US Vegweek campaign has been going on for years now, and they’ve used before and after surveys in the past to measure impact. Past surveys have focused on why people are taking the challenge (health, environment, animals) and occurred immediately at the start and end of the Vegweek campaign. The before data provided them insight on motivation, including the need to focus on meat-eaters as well as vegetarians when soliciting vegan pledges. They have shown that a significant number of people are planning on eating less meat from their diet. In the future they plan on trying to follow up a month or more later to see if the changes have stuck.

They would like to measure undercover investigations more, but it’s tough to do. According to a Kansas State study, meat consumption declines when animal welfare issues (including undercover investigations) are in the news. One of their goals is to ensure that people see the video on Youtube, and measure the increased traffic to tryveg.com as a result of their campaign.

Some of their marketing campaigns to expose factory farms on the legal end have proven successful, in particular their work to get the industry to remove the “Animal Care Certified” claim and logo from egg cartons. This work has allowed for a conversation in the media about battery cages that otherwise wouldn’t have happened, and opened up the eyes of the consumer in a way that undercover investigations by themselves might not have been able to do (though as an added benefit, undercover investigations are brought to consumers attention). It brings up a message of consumer protection (or lack thereof) and that certain foods are not as safe as previously thought. Specifically, their focus is related to the misleading nature of animal welfare claims, which can deceive the consumer.

Their educational campaigns show success through the popularity of the pro-veg commercials and US Vegweek.

Corporate campaigns to remove eggs from product lines have shown success (Boca). However, this is more of a past success; COK would need a new strategy to start approaching more companies in the future. They have found success by having specific company targets, getting one to change, and then moving on the to the next one (which is in turn pressured by the change of the previous company).

If information collected through their commercial campaigns showed that it was less effective than hoped, they would change their approach. They have a timeline to move forward with this in 2014, so will work to build a system to analyze whether to scale up or not.

Steps to improve success of programs

Some campaigns like advocating more vegan options at Subway weren’t as successful as they’d like. They did see success on a smaller scale (including the company deciding to test vegan patty options in DC, and a current rollout of hummus options in 1,000 Subway stores), but it hasn’t significantly expanded. Right now they aren’t putting a lot of focus on it, and instead are thinking about strategies for the next round of corporate campaigns. They have seen similar results with Dunkin Donuts campaign; they did see soymilk being offered in several markets, but the company has not offered any changes to their donut line.

These experiences have affected which targets they will choose in the future, their specific requests, and their approach for obtaining results. This will aid in future corporate outreach.

Some of their campaigns like the “Animal Care Certified” project require fees for local counsel, filing fees, and other legal-related expenses. Some of these services are provided pro-bono.

COK has eight employees total, including an Executive Director, General Counsel, Director of Campaigns, and Director of Operations. There is very little turnover in these positions; Directors have been in their position for 3+ years.

They have an orientation procedure for new staff or volunteers with the Director of operations. Some will happen in-person, others will be remote. COK has two offices, and one person works in a virtual position.

COK will share certain data upon request. They don’t have anything on their site right now but are not opposed to it. They hope to share data with others to help understand what was good and bad, and how to improve in the future.

They do not currently have a 5-year plan and do not feature related materials on their website currently, but they are in conversations with their donors and supporters. Some of it is confidential. It would be shared with the staff, but they are not sure that it is something that is appropriate for public consumption apart from some info from the directions of their campaigns.

COK has some interesting data and could influence decisions. They had an extensive conversation with FARM about US Vegweek campaign and the Meatout campaign (they are similar campaigns and both involve pledges). Their event is hosted around Earth Day, and one question they looked at was how many people were signing up for environmental reasons. According to past surveys, many of them were, but a problem was that people could select multiple answers to the question. They’ve restructured the question since and found that environmental was not as big of a reason as they had previously thought. They’d like to improve how they collect this information in the future.