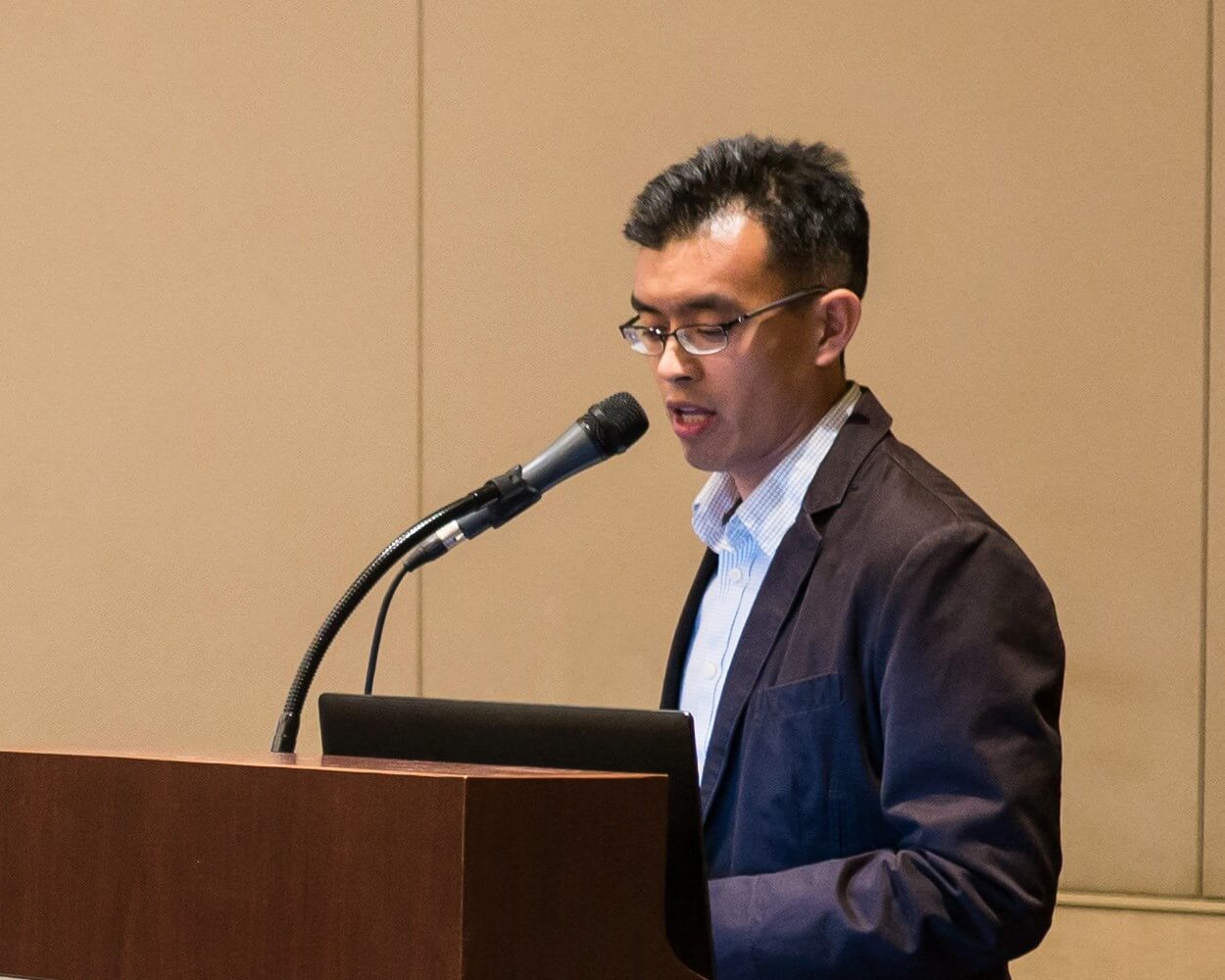 The following is a summary of a conversation that took place on March 13, 2015 as part of our investigation of undercover investigations and open rescues. Wayne Hsiung spoke with Allison Smith, ACE’s Director of Research. A lot of focus is placed on DxE’s video “Truth Matters” and on the making of that video.

Wayne started researching slaughterhouses ten years ago, on his own initiative, as a way to learn about the industry and its specific needs in terms of animal rights initiatives. Initiatives have been undertaken, but these are not open investigations, so he cannot share further details.

Choosing what project to tackle

DXE looks to tackle projects that fulfill at least one of three conditions:

In addition, there are practical considerations such as location, probability of prosecution, etc. One important issue is that a lot of companies are using aggressive animal welfare marketing, while not actually improving animal conditions.

DXE’s focus in the long run is on community engagement and helping to form long-term activists. The organization analogizes investigations lacking in long-term focus to power generators without a power grid or battery. DXE thinks of campaigns as generators, and community engagement as the power grid or battery that does the difficult change-creating work.

DXE opted not to publish their latest undercover video in a visual media outlet because the New York Times agreed to run a story describing the investigation on the condition that they were not allowed to share it with anyone else until publication. DXE opted for the NYT’s prestige over the full effect of displaying the content in its intended medium. Once the story went public, they distributed the high definition video to many visual media channels. 70–80% of these channels used it even though the story had already been released.

How many people were involved in the investigation?

Their recent video was publicized by Wayne and a colleague at DXE. Five people were part of the investigatory team. In addition, local people helped them in various small tasks while they were carrying out their investigations. They also have a network of lawyers that help them.

Wayne has reasonable knowledge of trespass laws around the country. DXE nevertheless consulted with several groups who were not made aware of what exactly they were doing, but rather answered general questions about laws and regulations.

Duration of the open rescue

Each visit took about 2–3 hours, plus travel time, for a total of 5 hours per visit. There were 10 visits, with 2–5 activists in each group. So a total of about 50 hours per person, of which 30 hours were actual investigation time. This is relatively short, compared to undercover investigations where it is necessary to conceal the cameras. In undercover investigations, the most significant time is spent just traveling around the country trying to find a place that can hire you AND that is susceptible to an undercover investigation. It’s also difficult to find someone who can actually get hired — generally, a Latino male who has the right personality characteristics. Historically, there have been activists who do not fit this profile exactly, e.g. TJ Tumasse, but it’s getting harder as ag interests pay more attention.)

Wayne spent a further 5–10 hours talking to attorneys. He was already quite knowledgeable before the most recent investigation, and simply ensured that he was made aware of any potential recent changes in the laws and regulations.

Another person at DXE did the press negotiations. It probably took about 20–40 hours, on a volunteer basis, contacting various press outlets. A lot of that time was likely spent figuring out who to contact and how. In addition, the individual spent 5–10 hours checking in with Wayne.

Social media promotion happened more spontaneously, thanks to a pre-existing network of people. They basically just reached out to those people and then it took off on its own.

At least 40–50 hours were put in. It is crucial for the video to be high quality and to have storytelling properties. If they had hired a professional editor to do this work, it would probably have cost thousands of dollars but fortunately it was done by volunteers.

DXE and open rescues in the future

DXE wants to create infrastructure to enable others to carry out similar work. Unfortunately, most people will not because they are afraid of legal prosecution despite the fact that you are only likely to face serious prosecution if you destroy physical property. So DXE is working on sharing legal resources to spread knowledge about the AETA, trespass, burglary, and other laws, so that activists gain confidence.

In addition, DXE is trying to create a social support network as this work can be depressing and disheartening especially if you can’t share it with anyone.

DXE is currently designing two new investigations, and starting up two new autonomous teams around the world. The hope is to create a new mentality where everybody can do this sort of work, so that the number of investigations increases. The projected timeline for this is 5–10 years.

As long as the image of people doing investigations is strong, public coverage due to a prosecution is likely to do good for animals in the long term. This has historically been the case with ag-gag prosecution. Investigators need to be good representatives of animals; compassionate in a non-violent way. More concretely, none of the members of the DXE team has been previously convicted. This strategy shares similarities to the case of the prosecution of Rosa Parks. She was perceived as a gentle, professional woman, in part because she had no criminal history. The investigator should be someone the audience can relate to, someone who can be perceived as similar to relatives, friends and colleagues.

The main difficulty is emotional: volunteers often hesitate to work under strenuous conditions observing horrible acts of violence. Another problem is lack of information: many volunteers wishing to do open rescues do not know how to get started. Part of this is because it’s hard for organizations to publicly disclose information only to the people that they want to share the information with. Another part of it is due to competition between different nonprofit organizations.

DXE has had 50 press appearances in 2015 so far, and they expect to get 3–5 per month throughout the year. They estimate that 50–100k people were exposed to animal rights as a result of each of these press appearances. In addition, they place a lot of emphasis on social networks; they had over 50k unique views on their video, and they estimate 5 million people were exposed to their work through social media in the weeks after the initial release, including shared demonstrations and press coverage. This estimate is approximate, since some data is hard to collect with their decentralized model.

Finally, they have a keen interest in building communities. They are working towards building 5 regional chapters within 2015, and they believe that this sense of community is what really helps to strengthen the animal rights movement.

Collaboration with other groups

In essence, big heart and a smart phone. More concretely, the three main necessities are: the emotional strength to withstand the horrible cruelty that must be witnessed; some physical fitness; and the ability to talk to the public. In terms of physical needs, a camera is a must, but a smartphone can usually work just fine; other than that, headlamps might be useful. Also, you need to be able to get into the place you want to study.

The second main difference is in the nature of the storytelling. Undercover investigations are more about disclosing facts, and the stories are told from a certain distance. Open rescues are more about building a connection between individual humans and individual animals. Depicted correctly, the symbolism is very powerful: a weak, injured individual is liberated by a caring individual. There’s a qualitative difference in the sort of footage you can get. You can spend as much time as needed with an individual animal, and “set up” shots that you want. This allows for effective artistry and storytelling in a way that undercover footage will never allow, as with the latter, you’re lucky to get anything usable at all.

Other good organizations doing this work

Animal Liberation Victoria and Animal Equality do very good work that has inspired DXE. The main difference is that DXE places a strong emphasis on campaigns and community building, hoping to create a platform that resembles open-source software, where new activists can take what they need from the platform and get straight to work.

Other activities that are necessary for open rescues to make sense

The first need is to develop a legal framework and understand criminal law. For example, it’s important to know that there are exceptions to trespass laws. Also, one should consider that DXE has no marketing budget, so it is crucial for them to develop a grassroots community that helps them spread their information.

Is the effectiveness of open rescues going to change in the near future?

This is unclear. There is an argument for the decreasing marginal efficacy open rescues: when you first expose a company, the difference between people’s expectations and reality is very large, but as you show more and more information, this gap reduces. On the other hand, one might argue that people currently perceive animal rights as a marginal issue and as media show more and more information about it, people will be more aware of it, and the returns will increase.

How this plays out depends largely on how groups organize their strategies; for example, if groups start behaving violently, this will affect the image of open rescues negatively. Increasing marginal returns will require activists to keep an open mind and adapt to the information, learning as they go.

Patty Mark is an activist who started because of a love for animals, especially birds. This love has translated into a talent for communicating the work she’s been doing for 25 years. She’s based in Australia.

In Israel, there are the Institution for Undercover Investigation and 269 Life. It might also be interesting to talk to Carter Dillard, the new Director of the investigatory team at ALDF. T.J. Tumasse is the leading investigator in that team and they are based in the USA. They have a lot of legal experience.